Are We Shooting Ourselves in the Foot with Stack Overflow? 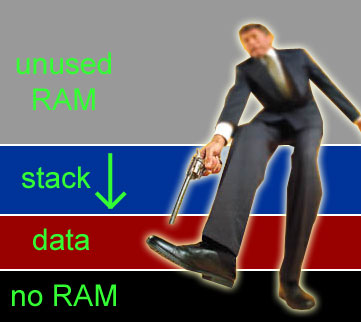 In the latest Lesson #10 of my Embedded C Programming with ARM Cortex-M Video Course I explain what stack overflow is and I show what can transpire deep inside an embedded microcontroller when the stack pointer register (SP) goes out of bounds. You can watch the YouTube video to see the details, but basically when the stack overflows, memory beyond the stack bound gets corrupted and your code will eventually fail. If you are lucky, your program will crash quickly. If you are less lucky, however, your program will limp along in some crippled state, not quite dead but not fully functional either. Code like this can kill people.

Unless you’ve been living under a rock for a past couple of years, you must have heard of the Toyota unintended acceleration (UA) cases, where Camry and other Toyota vehicles accelerated unexpectedly and some of them managed to kill people and all of them scared the hell out of their drivers.

The recent trial testimony delivered at the Oklahoma trial by an embedded guru Michael Barr for the fist time in history of these trials offers a glimpse into the Toyota throttle control software. In his deposition, Michael explains how a stack overflow could corrupt the critical variables of the operating system (OSEK in this case), because they were located in memory adjacent to the top of the stack. The following two slides from Michael’s testimony explain the memory layout around the stack and why stack overflow was likely in the Toyota code (see the complete set of Michael’s slides). 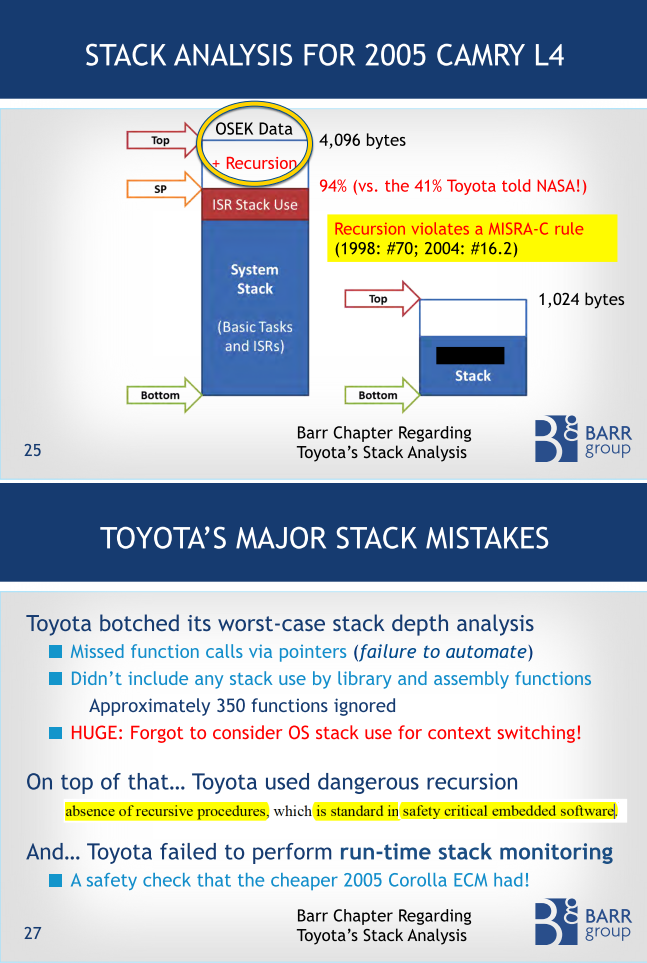 Why Were People Killed?

Instead, the problem was exactly that the system kept running after the stack overflow. But due to the memory corruption some tasks got “killed” (or “forgotten”) by the OSEK real-time operating system while other tasks were still running. This, in turn, caused the engine to run, but with the throttle “stuck” in the wide-open position, because the “kitchen-sink” TaskX, as Michael calls it, which controlled the throttle among many other things, was dead.

A Shot in the Foot

The data corruption caused by the stack overflow is completely self inflicted. I mean, we know exactly which way the stack grows on any given CPU architecture. For example, on the V850 CPU used in the Toyota engine control module (ECM) the stack grows towards the lower memory addresses, which is traditionally called a “descending stack” or a stack growing “down”. In this sense the stack is like a loaded gun that points either up or down in the RAM address space. Placing your foot (or your critical data for that matter) exactly at the muzzle of this gun doesn’t sound very smart, does it? In fact, doing so goes squarely against the very first NRA Gun Safety Rule: “ ALWAYS keep the gun pointed in a safe direction”.

Yet, as illustrated in the Figure above, most traditional, beaten path memory layouts allocate the stack space above the data sections in RAM, even though the stack grows “down” (towards the lower memory addresses) in most embedded processors (see Table below ). This arrangement puts your program data in the path of destruction of a stack overflow. In other words, you violate the first  NRA Gun Safety Rule and you end up shooting yourself in the foot, as did Toyota.

At this point, I hope it makes sense to suggest that you consider pointing the stack in a safe direction. For a CPU with the stack growing “down” this means that you should place the stack at the start of RAM, below all the data sections. As illustrated in the Figure below, that way you will make sure that a stack overflow can’t corrupt anything.

Of course, a simple reordering of sections in RAM does nothing to actually prevent a stack overflow, in the same way as pointing a gun to the ground does not prevent the gun from firing. Stack overflow prevention is an entirely different issue that requires a careful software design and a thorough stack usage analysis to size the stack adequately.

But the reordering of sections in RAM helps in two ways. First, you play safe by protecting the data from corruption by the stack. Second, on many systems you also get an instantaneous and free stack overflow detection in form of a hardware exception triggered in the CPU. For example, on ARM Cortex-M an attempt to read to or write from an address below the beginning of RAM causes the Hard Fault exception. Later in the article I will show how to design the exception handler to avoid shooting yourself in the foot again. But before I do this, let me first explain how to change the order of sections in RAM.

How to Change the Default Order of Sections in RAM

On the other hand, a linker script for the IAR toolchain (typically a file with the .icf extension) requires a different strategy. For some reason simple reordering of sections does not do the trick and you need to replace the last line of the standard linker script:

with the following two lines:

As I mentioned earlier, an overflow of a descending stack placed at the start of RAM causes the Hard Fault exception on an ARM Cortex-M microcontroller. This is exactly what you want, because the exception handler provides you the last line of defense to perform damage control. However, you must be very careful how you write the exception handler, because your stack pointer (SP) is out of bounds at this point and any attempt to use the stack will fail and cause another Hard Fault exception. I hope you can see how this would lead to an endless cycle that would lock up the machine even before you had a chance to do any damage control. In other words, you must be careful here not to shoot yourself in the foot again.

So, you clearly can’t write the Hard Fault exception handler in standard C, because a standard C function most likely will access the stack. But, it is still possible to use non-standard extensions to C to get the job done. For example, the GNU compiler provides the __attribute__((naked)) extension, which indicates to the compiler that the specified function does not need prologue/epilogue sequences. Specifically, the GNU compiler will not save or restore any registers on the stack for a “naked” function. The following listing shows the definition of the HardFault_Handler() exception handler, whereas the name conforms to the Cortex Microcontroller Software Interface Standard (CMSIS):

Please note how the __attribute__((naked)) extension is applied to the declaration of the HardFault_Handler() function. The function definition is written entirely in assembly. It starts with moving the SP register into R0 and tests whether it is in bound. A one-sided check against __stack_start__ is sufficient, because you know that the stack grows “down” in this case. If a stack overflow is detected, the SP is restored back to the original end of the stack section __stack_end__. At this point the stack pointer is repaired and you can call a standard C function. Here, I call the function assert_failed(), commonly used to handle failing assertions. assert_failed() can be a standard C function, but it should not return. Its job is to perform application-specific fail-safe shutdown and logging of the error followed typically by a system reset. The code downloads accompanying this article[6] provide an example of assert_failed() implementation in the board support package (BSP).

On a side note, I’d like to warn you against coding any exception handler as an endless loop, which is another beaten path approach taken in most startup code examples provided by microcontroller vendors. Such code locks up the machine, which might be useful during debugging, but is almost never what you want in the production code. Unfortunately, all too often I see developers shooting themselves in the foot yet again by leaving this dangerous code in the final product.

For completeness, I want to mention how to implement HardFault_Handler() exception handler in the IAR toolset. The non-standard extended keyword you can use here is __stackless, which means exactly that the IAR compiler should not use the stack in the designated function. The IAR version can also use the IAR intrinsic functions __get_SP() and __set_SP() to get and set the stack pointer, respectively, instead of inline assembly:

What About an RTOS?

The technique of placing the stack at the start of RAM is not going to work if you use an RTOS kernel that requires a separate stack for every task. In this case, you simply cannot align all these multiple stacks at the single address in RAM. But even for multiple stacks, I would recommend taking a minute to think about the safest placement of the stacks in RAM as opposed to allocating the stacks statically inside the code and leaving it completely up to the linker to place the stacks somewhere in the .bss section.

Finally, I would like to point out that preemptive multitasking is also possible with a single-stack kernel, for which the simple technique of aligning the stack at the start of RAM works very well. Contrary to many misconceptions, single-stack preemptive kernels are quite popular. For example, the so called basic tasks of the OSEK-VDX standard all nest on a single stack, and therefore Toyota had to deal with only one stack (see Barr’s slides at the beginning). For more information about single-stack preemptive kernels, please refer to my article “Build a Super-Simple Tasker”.

The most important strategy to deal with rare, but catastrophic faults, such as stack overflow is that you need to carefully design and actually test your system’s response to such faults. However, typically you cannot just wait for a rare fault to happen by itself. Instead, you need to use a technique called scientifically fault injection, which simply means that you need to intentionally cause the fault (you need to fire the gun!). In case of stack overflow you have several options: you might intentionally reduce the size of the stack section so that it is too small. You can also use the debugger to change the SP register manually. From there, I recommend that you single -step through the code in the debugger and verify that the system behaves as you intended. Chances are that you might be shooting yourself in the foot, just as it happened to Toyota.

I would be very interested to hear what you find out. Is your stack placed above the data section? Are your exception handlers coded as endless loops? Please leave a comment!